Dr. John Wood, a long-standing colleague and friend to many in the UBC community died on November 23, 2022. John was a member of the Department of Political Science for 35 years, teaching and researching in the field of Comparative Politics, with specific interest and experience in the politics of India and South Asia. 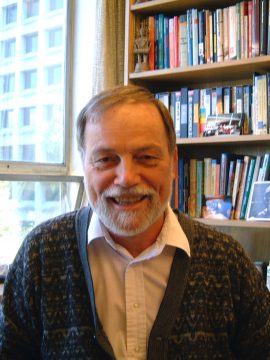 JOHN R. WOOD (Ph..D Columbia) taught for thirty-five years in the field of Comparative Non-Western Government, with primary focus on the politics of India and South Asia.  As an area specialist his research interests have been multidisciplinary and his theoretical approaches eclectic. His published work on India has included studies of state politics and federalism; extra-parliamentary struggles; nationalism, ethnic conflict and separatism; party recruitment strategies, the reservation problem; and environmental and human rights issues.  He has also published articles on Canada-India relations and on the politics of the Indo-Canadian community. In 1996 he chaired a seminar on the India-Canada relationship for Indian external affairs officials, Prime Minister Jean Chretien, nine Premiers and Team Canada members in New Delhi.  He is currently Honorary Professor in the Institute of Asian Research at UBC.

He chaired the $1 m. fundraising campaign and was the founding Director of the Centre for India and South Asian Research, one of the area components of the Institute of Asian Research.  At the national level he was a member of the executive of the Canadian Asian Studies Association (South Asia Council) from 1992 to 2004 and its President during 2002-2004.  For over three decades he has been associated with the work of the Shastri Indo-Canadian Institute, which promotes academic exchange between India and Canada.. He served three times as Resident Director of SICI in New Delhi (1973-75, 1989-90 and 2004-06) and was President of its Board of Directors during 1994-1996.

In 2008 he became an Honorary Professor in the Institute of Asian Research at UBC and Project Leader in India of a collaborative multi-institutional research project on Community Natural Resource Management. The project, funded by a Millennial Development Goals grant from the Shastri Indo-Canadian Institute, studied the impact on poverty of new community institutions at the village level designed to manage water, forests and fishing in 30 villages of Gujarat and Madhya Pradesh states.