The Political Science curriculum is sequenced so that what you learn in one year prepares you to learn more sophisticated material and skills in subsequent years.

This sequencing allows instructors to prepare materials that are appropriate for learning at a particular stage in a four-year learning process. It is recommended that you take courses from each level at the corresponding year of your studies.

Political Science is a very diverse discipline — the subjects of our scholarship include all parts of the world geographically, the full sweep of the history of politics and political thought, and many themes and topics that cross the boundaries of place and time. The predominant fields in our study of politics include:

Each of these fields has an introductory course at the first or second year level. These courses provide a foundation to do specialized learning in that field in the third and fourth years of the program.

Our first year courses provide an introduction to the study of politics, the many ways you can study it, and the basic language of political analysis.

Students interested in politics, government, political ideas, political economy, and international affairs should begin their studies with the broad introductions to Political Science in our three introductory courses. Ideally, students take POLI 100 in the first term, and POLI 110 in second term of their first year. Students majoring in political science also take POLI 101 and those interested in Canadian politics should take this course in their first two years.

These courses combine lectures in large classes with instruction and discussion in small group tutorials.

This course introduces key concepts and ideas underpinning modern western politics, as well as contemporary challenges. It provides students with the conceptual vocabulary of our discipline. It is meant to be an introduction to four areas of study within Political Science at UBC: Canadian Politics, Comparative Politics, Political Theory, and International Relations.

POLI 100 also introduces students to studying and discussing the challenges of modern politics, such as globalization and identity politics. In order to examine how these concepts make a difference in our daily political life, tutorial discussion groups use contemporary case studies to make the discussion specific, concrete and relevant. Students develop and extend their skills in conceptual analysis, argument, and writing.

This introductory course on Canadian government and politics is particularly relevant for students who are interested in Canadian politics and government, but who are unlikely to major in Political Science. It presumes no background in Political Science, and teaches both government (the core institutions that determine how Canadians are governed) and politics (the issues, controversies, debates that animate Canadian political life).

This course prepares students to engage with research in political science by introducing the basic logic and tools political scientists use to understand and explain the political world.

The course teaches students to ask answerable questions as Political Scientists; how we — students and professors — define key political concepts; how we formulate hypotheses and theories about political dynamics; how we measure the phenomena we want to study; how we think about and assess relationships of cause-and-effect; and how we report our findings to the world.

We consider these issues by examining how Political Scientists have investigated major questions in domestic and international affairs, such as why ethnic diversity sometimes leads to civil war, whether international intervention can bring about democracy, and how we can determine which country has the best healthcare policies.

POLI 100 is a prerequisite for all second-year (200 level) Political Science courses. Students considering the Major or Honours programs are advised to take POLI 100 (Introduction to Politics), POLI 101 (The Government of Canada), and POLI 110 (Investigating Politics) in their first year and preferably no later than the end of their second year. POLI 110 is a prerequisite for POLI 380.

Our second year courses enable students to focus their exploration of Political Science within four areas of the discipline: Comparative Politics (POLI 220), Political Theory (POLI 240), and International Relations (POLI 260). POLI 101, a companion to these courses, introduces students to the field of Canadian Politics.

Students interested in studying abroad in their third year should consult with UBC’s Go Global program during their second year.

This course introduces students to the field of Comparative Politics, and concentrates on several broad themes: comparative analysis, the state, nations and society, political regimes, markets and development.

Within these themes, students learn about state development, state failure, nationalism, ethnic conflict and civil war, democracy and its alternatives, political institutions, political culture, welfare states and inequality, globalization and development. These themes are explored through a set of case studies that include both advanced democracies and developing countries.

How do we live together on the earth? How should we organize ourselves? What are the implications — for justice, freedom, equality, happiness — of different approaches to living together? In political theory we assess actually existing practices, their value, and possible alternatives.

We gain reflective insight into key political concepts such as freedom, power, equality, oppression, domination and justice, and we use such concepts to think about real-world practices and structures including democracy, capitalism, colonialism, empire, gender, race, and rights.

Studying political theory will develop you as a person, helping you examine yourself, and it will cultivate your critical capacities as a citizen.

In this course students acquire the skills needed to conduct detailed analysis of political ideas. The course familiarizes students with some of the key thinkers in the history of political thought, and explores how their ideas contributed to the evolution of western political practice.

The international system encompasses all the various relationships and actions between states and non-state actors. Understanding events, norms, and trends in international politics requires a distinct set of theoretical, analytic, and empirical tools.

Grounded in the history of the international system, the study of international relations points us toward predictions of the big patterns of peace, conflict, and trade in our world.

Major questions addressed in the course involve the causes of war and peace, security and insecurity, the patterns of global trade, the power of the institutions of global governance, development, and the diffusion of international norms.

Once students are admitted to the Major, Honours, or Combined Major programs in their third year, they begin to take more specialized courses on particular topics within each of the subfields of the discipline.

Taking the 200 level course in a particular subfield is strongly advised as preparation for 300 level and 400 level courses in that subfield. For example, POLI260 (Introduction to Global Politics) prepares you for the 20 specialized courses offered in International Relations topics in third and fourth year. Most 300 level courses have between 60-100 students per class.

The seminar course format facilitates the development of skills in:

Often, students choose to pursue topics that they have explored in these seminars when they develop a plan for further education (MA, PhD, MPP, MPH, LLB, etc.). These 400 level courses give a preview of the format and expectations of seminars and research-based learning central to many graduate programs.

UBC Political Science is now providing major and honours program graduates with a more robust representation of what they learned and did in their Political Science courses by issuing what we call “Rich Transcripts”.

These two-page documents aim to help graduates recall and articulate the various aspects of their learning experience and the skills they developed throughout their Political Science program. 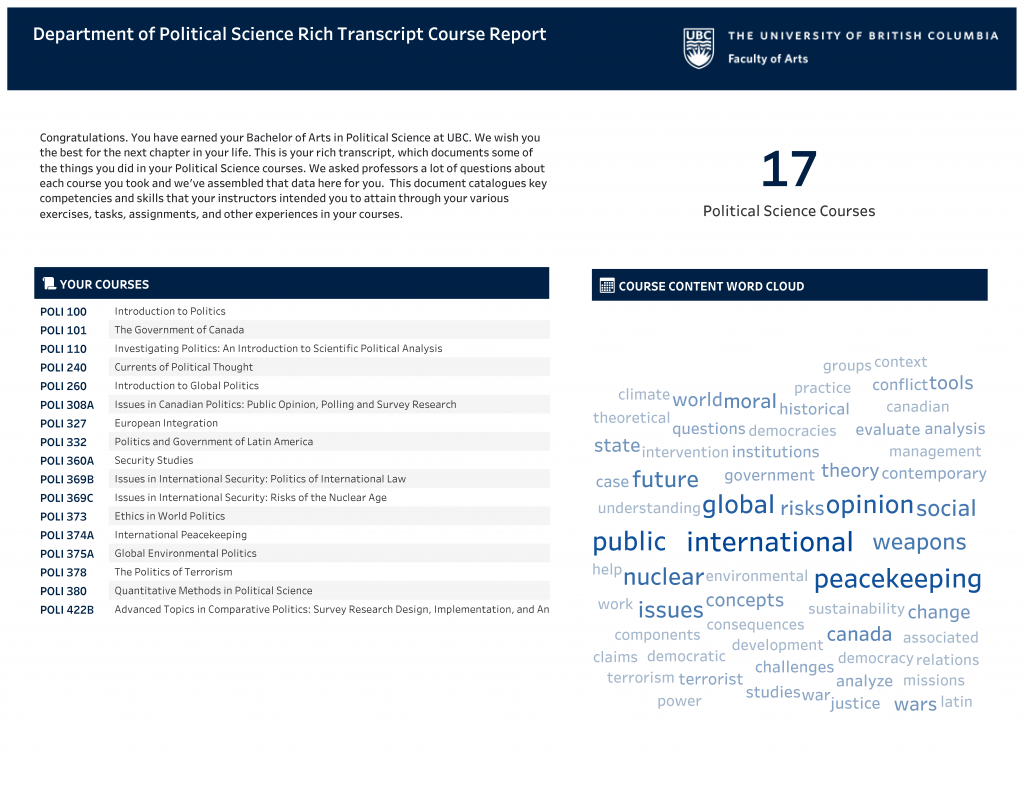 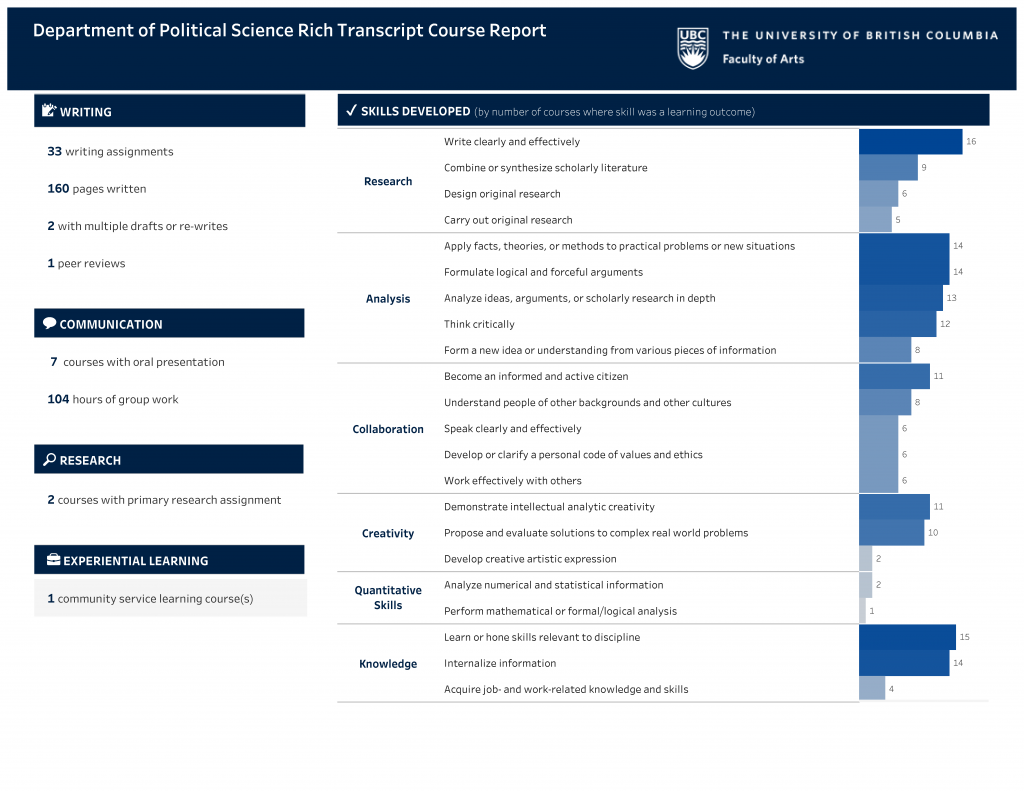