The Myth of International Order

In February of 2011, Libyan citizens rebelled against Muammar Qaddafi and quickly unseated him. The speed of the regime’s collapse confounded many observers, and the ensuing civil war showed Foreign Policy’s index of failed states to be deeply flawed–FP had, in 2010, identified 110 states as being more likely than Libya to descend into chaos. They were spectacularly wrong, but this points to a larger error in conventional foreign policy wisdom: failed, or weak and unstable, states are not anomalies but are instead in the majority. More states resemble Libya than Sweden.

Why are most states weak and unstable? Taking as his launching point Charles Tilly’s famous dictum that ‘war made the state, and the state made war,’ Arjun Chowdhury argues that the problem lies in our mistaken equation of democracy and economic power with stability. But major wars are the true source of stability: only the existential crisis that such wars produced could lead citizens to willingly sacrifice the resources that allowed the state to build the capacity it needed for survival. Developing states in the postcolonial era never experienced the demands major interstate war placed on European states, and hence citizens in those nations have been unwilling to sacrifice the resources that would build state capacity. For example, India and Mexico are established democracies with large economies. Despite their indices of stability, both countries are far from stable: there is an active Maoist insurgency in almost a quarter of India’s districts, and Mexico is plagued by violence, drug trafficking, and high levels of corruption in local government. Nor are either effective at collecting revenue. As a consequence, they do not have the tax base necessary to perform the most fundamental tasks of modern states: controlling organized violence in a given territory and providing basic services to citizens. By this standard, the majority of states in the world–about two thirds–are weak states.

Chowdury maintains that an accurate evaluation of international security requires a normative shift : the language of weakness and failure belies the fact that strong states are exceptions. Chowdhury believes that dismantling this norm is crucial, as it encourages developing states to pursue state-building via war, which is an extremely costly approach–in terms of human lives and capital. Moreover, in our era, such an approach is destined to fail because the total wars of the past are highly unlikely to occur today. Just as importantly, the non-state alternatives on offer are not viable alternatives. For better or worse, we will continue to live in a state-dominated world where most states are weak. Counterintuitive and sweeping in its coverage, The Myth of International Order demands that we fundamentally rethink foundational concepts of international politics like political stability and state failure. 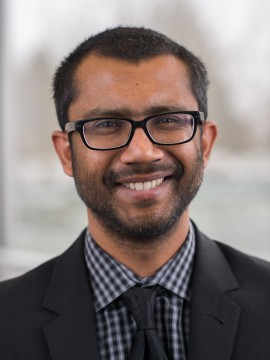 Arjun Chowdhury is an Assistant Professor specializing in International Relations and Security Studies. He was previously a Postdoctoral Fellow at the University of Pennsylvania. He is the author of several articles and book chapters on international relations theory and international security issues.